PETA’s Libby Awards made me really happy. Best vegan cheese: Food for Lovers queso cheese? Yay! Best vegan-friendly restaurant chain: Tropical Smoothie Cafe? Double Yay! (Can’t get enough of their Beyond Meat options) Best vegan meat: Gardein Sizzling Schezuan Beefless Strips? Got ’em in my freezer and can’t wait to toss ’em into this Chinese Stirfry tonight from The Ginger People. And best vegan snack: Dole Banana Dippers with Almonds and Dark Chocolate make a great friend for any sweet tooth, if you ask me. But here are a few simpler treasure troves of vegan deliciousness that you can find at almost any supermarket. P.S. Your stomach will thank you if you start throwing them into your rotation more often.

I love Frontier’s Organic Vietnamese cinnamon, but any nice variety will do. Add it to the obvious dishes like oatmeal and smoothies, but it also makes a welcome addition stirred into savory meals like stews or spicy marinades.

Sounds a bit strange to ask you, dear readers (all 12 of you!), to keep these crunchy cakes on hand, but they’re a lifesaver when you’re in a pinch the day or two before grocery shopping. I crumble them up into a salad with balsamic vinaigrette dressing as makeshift croutons or have them for breakfast with a thick layer of almond butter, banana slices and a sprinkle of that ever-handy cinnamon on top.

I’m consistently amazed on how well these bits of flaky goodness (you can buy it powdered too) dazzle in pasta dishes that call for parm or mixed into a big tossed salad. Basically, whenever I feel like I’ve been forgetful with taking that B12 supplement, I sprinkle these vitamin B12 flakes over whatever I’m eating. 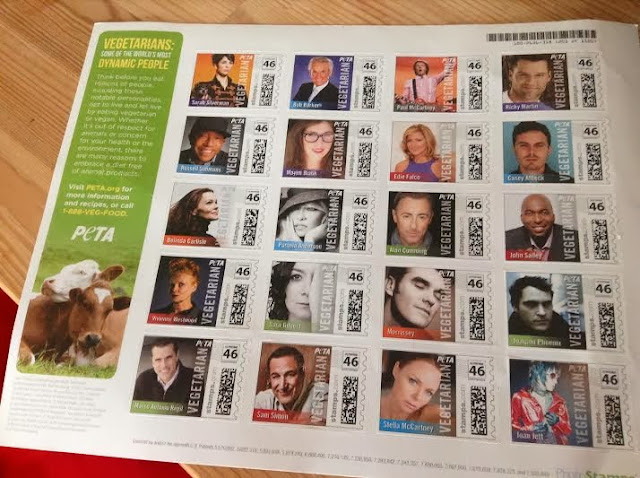 This past year, I became an accidental vegan advocate of sorts when I wrote a series of researched pieces on veganism for Reader’s Digest (11 Convincing Reasons That Going Vegan Isn’t Crazy, 12 Expert Tips for Becoming Vegan, etc.). It certainly changed my plate and I hope inspired more than a few others too (whether that means joining Meatless Mondays, just crowding out some bad foods by loading up on more veggies when you can, or going from vegetarian to vegan). So when I opened an envelope at work, I was so touched to see that a spokesperson for PETA had written me a note and sent me this beautiful and inspiring sheet of U.S. Postage Photo Stamps (A set of 20 is $9.20, or at least according to my .46 * 20 math skills it is…)

It’ll set you back less than a Hamilton (It’s okay, I had to look up who was on the $10 too, folks) and make mailing off your monthly rent check that much less painful. Okay, okay, so maybe it won’t, but who doesn’t need stamps? It’s the perfect practical gift that everybody could always use extras. And there’s something really nice about thinking that somewhere in a sea of letters, as your envelope crosses through the states, a postal worker in a mail room, your delivery person or a faceless recipient of your Con Ed bill sees the stamp and thinks “Hey, if Sarah Silverman can do it, maybe I can change my plate, too.”