So many reasons to love this perfect, chunky spread that happens to be naturally vegan. We all know it’s so blah blah blah healthy your gut microbiota does a happy dance, but it also happens to be the most delicious thing to meet sliced bread on a hot summer’s day that I can think of.

Recently, I’ve been recipe testing up a guacamole storm (In fact, I’ve got so much in my fridge, I’ve started using it on pasta in lieu of tomato sauce. Pretty tasty, who knew?) for Camp Sunshine, where I’ll be volunteering later this summer. I’m looking forward to cranking out a classic rendition of it in August with the kids, but a household lime-and-red-tomato shortage (the horror!) led me to stumble upon this fun riff on the classic.

*Pictured below, Kumato tomatoes are mildly sweet, crisp and juicy brown-red-green-purpley tomatoes that are worth checking out. 1. Scoop out avocados into bowl and combine with tomato, basil, olive oil and lemon juice. Mash with fork to desired consistency Add sea salt and freshly cracked pepper. A flip of cayenne pepper for heat. Serve immediately or store in fridge and squeeze lemon over it every few hours to keep from oxidizing. Or if you forget to do that, squeeze with lemon before serving and hope it de-browns. Meanwhile, like in life, one good thing leads to another (or an occasional bad decision) and four avocados later, I arrived at another hit. 2 ripe avocados
1 Kumato tomato, small dice
A handful of washed, fresh basil leaves, stems removed and torn or chiffonaded (if you’re feeling fancy)
1 tablespoon olive oil
1 tablespoon capers
The juice from one medium-sized lemon, or to taste
Cayenne and paprika, to taste (I used a dash of each)
Salt and pepper, to taste
Splash Balsamic vinegar (optional)

1. Follow the same directions as above but with this set of ingredients. I’m pretty sure you know how to make guacamole. This rendition works particularly well spread on toast or, if you’re note feeling vegan, spread out as a bed for a plan of grilled salmon. Crusty french bread. It’s my downfall. I basically spend 41% of each day attempting to figure out, “What meal can I create that create a delicious vestibule to dip crusty french bread?” The answer, unfortunately for my carbohydrates intake, is pretty much everything.

Thankfully, this healthy Greek Salad leaves me full enough that my baguette-a-day addiction has dissipated. 1. Mix all salad ingredient in bowl. Add dressing and coat evenly.
2. If possible, refrigerate for an hour to let dressing soak in. Eat!
3. Yes, it’s okay to sop up the extra dressing with crusty french bread.

They say the more colors on your plate, the more likely you’ll be able to curb overeating. Or maybe they don’t; but it’s sure pretty to look at a spectrum of vibrant fruits and veggies and definitely slows me down when it comes to digging in. 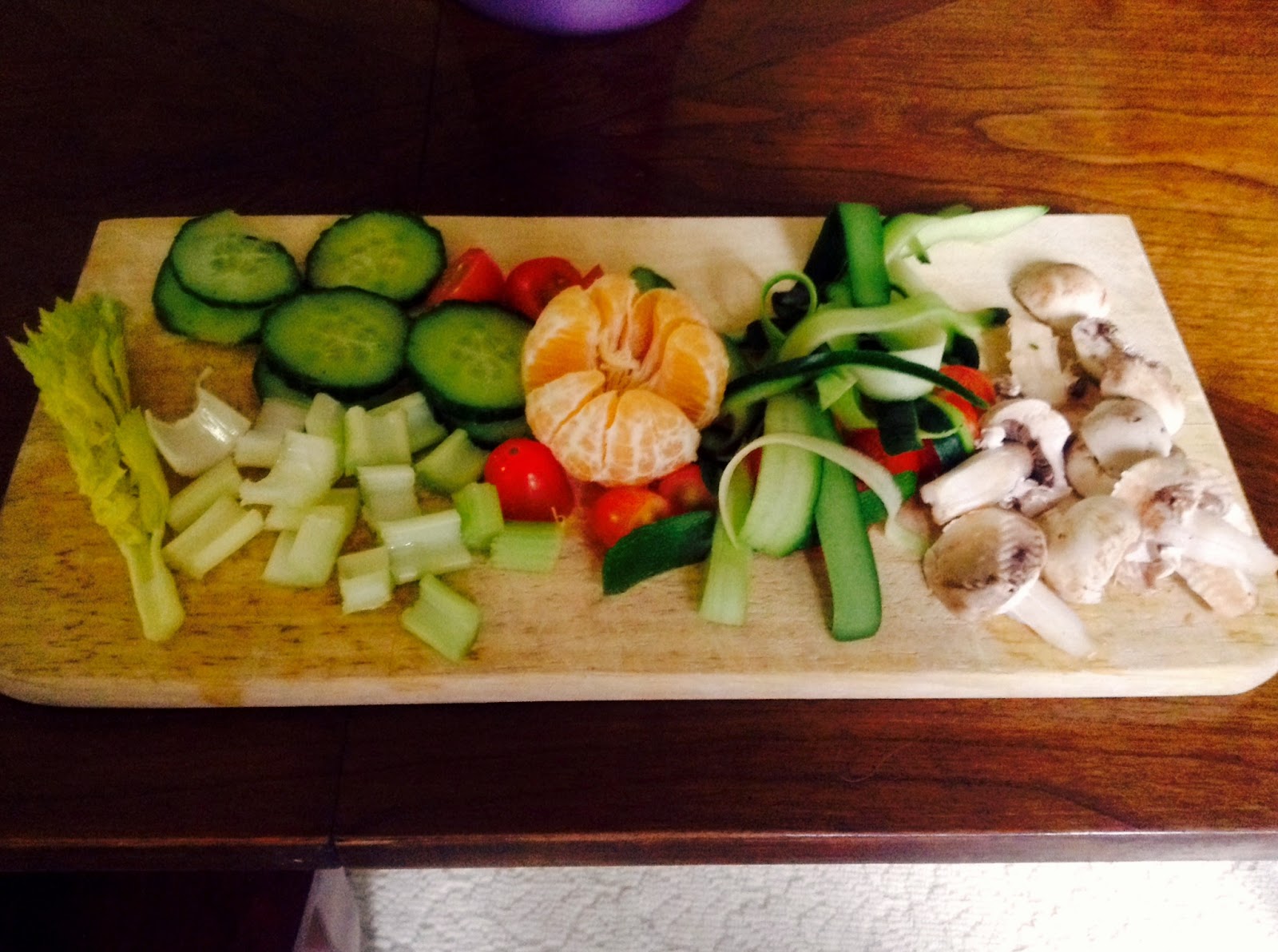 So bye bye simple crudités and dip. This simple salad is way easier to assemble than it looks. Just slice, dice and arrange everything on a plate to your heart’s desire…and to emulate that way-too-perfect food blogger on instagram who always annoys you with food arrangements so pretty you don’t understand how anyone’s life can be so perfect (pro-tip: It probably took them 45 minutes to assemble everything, and by the time they get to eating that warm stack of vegan chocolate chip banana nut pancakes, they are cold.) 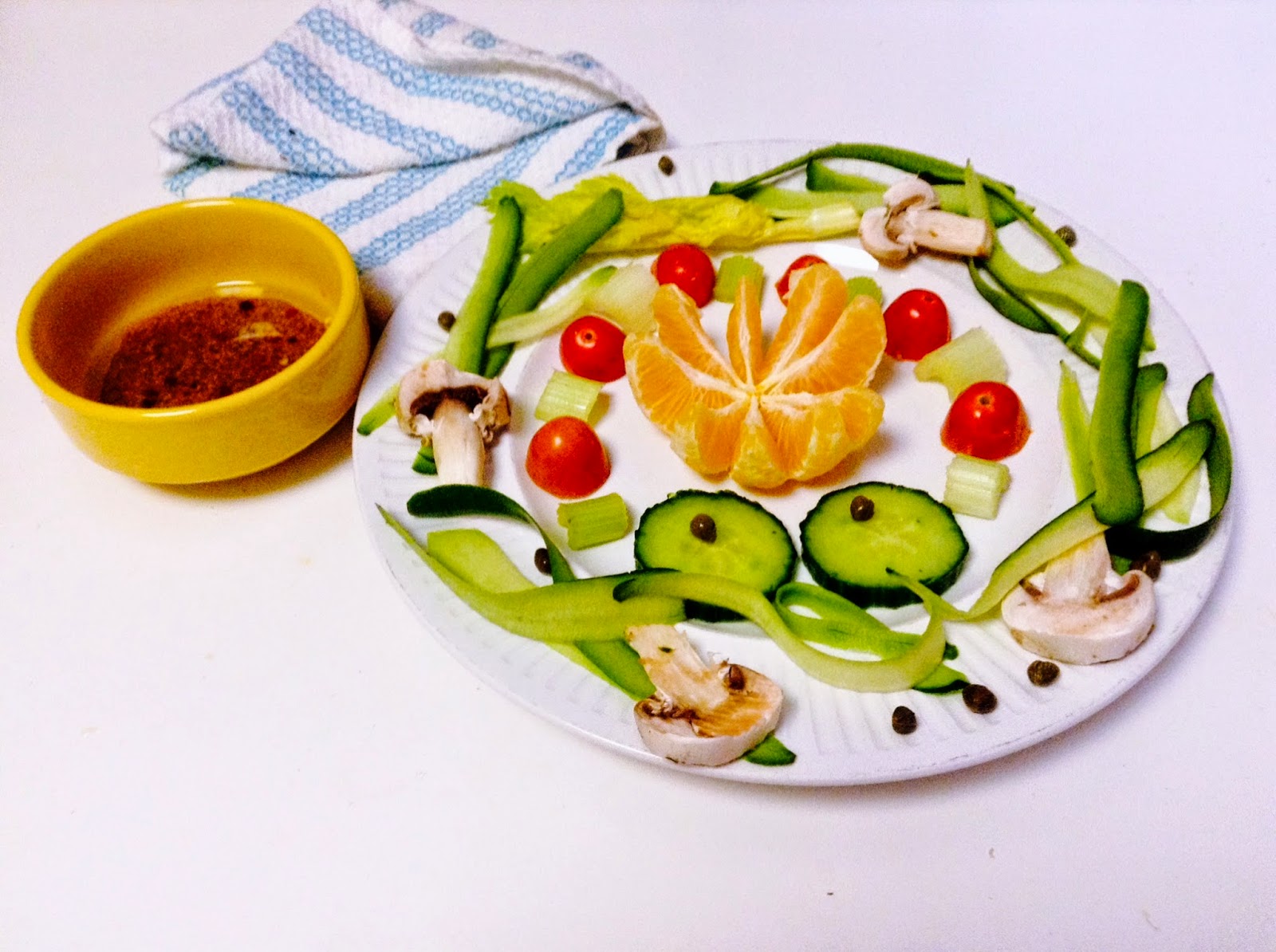 Ingredients:
Whatever leftover veggies and fruits you have on hand

Arrange prettily on plate and as symmetrically as possible. Try and remember to buy enough lettuce next time. Drizzle dressing on top. Pair with copious amount of crusty  French baguette. 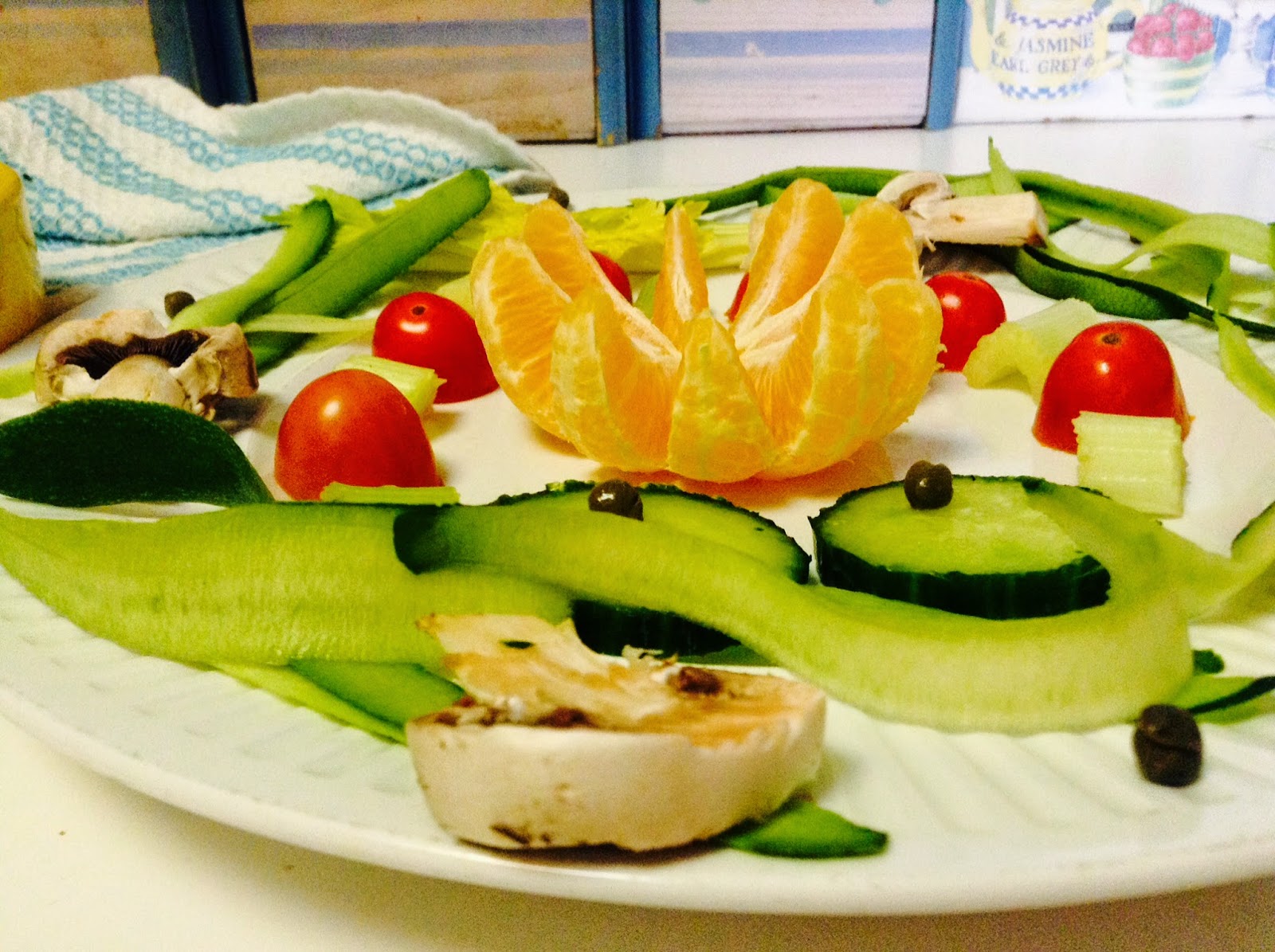 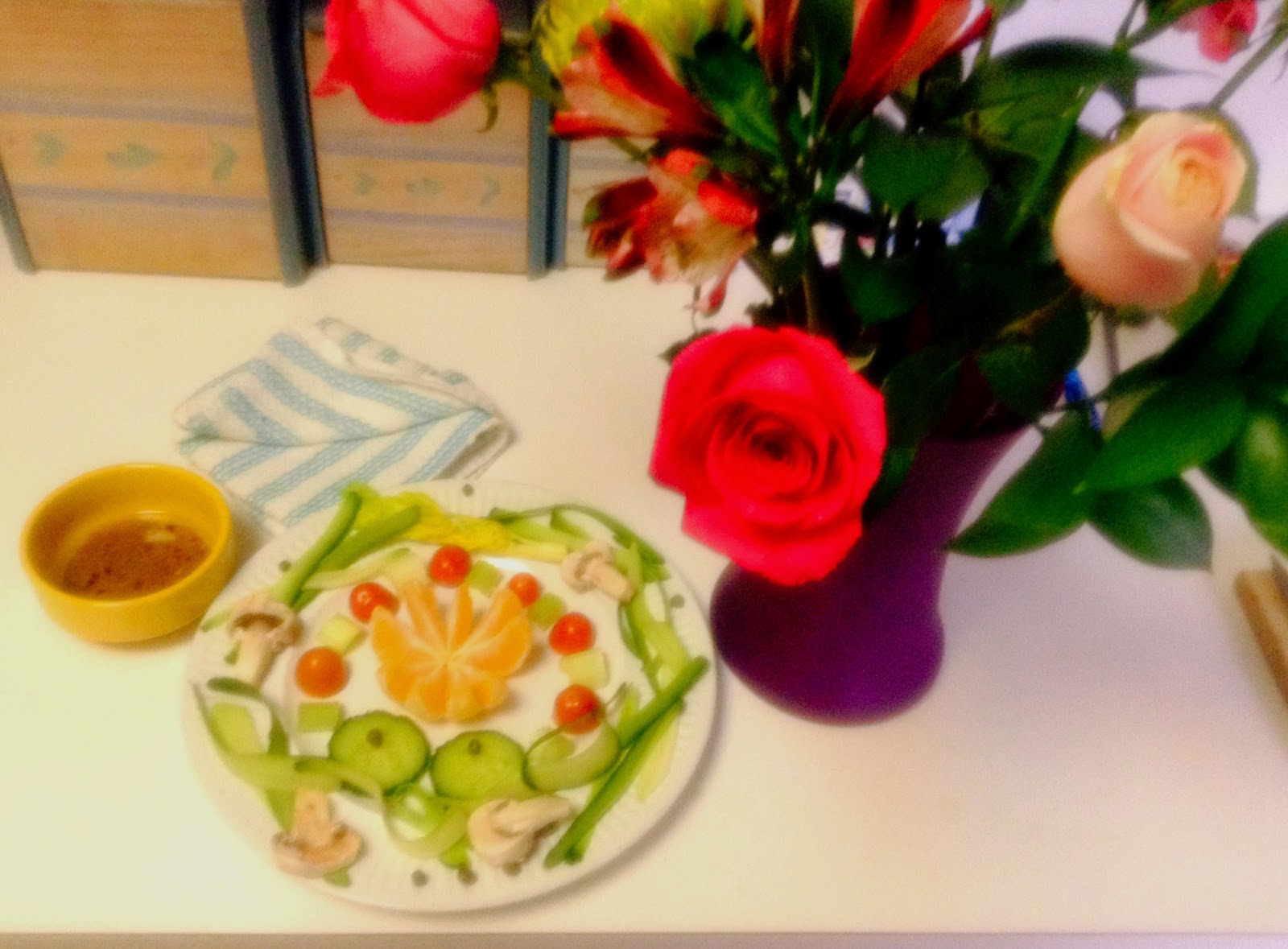 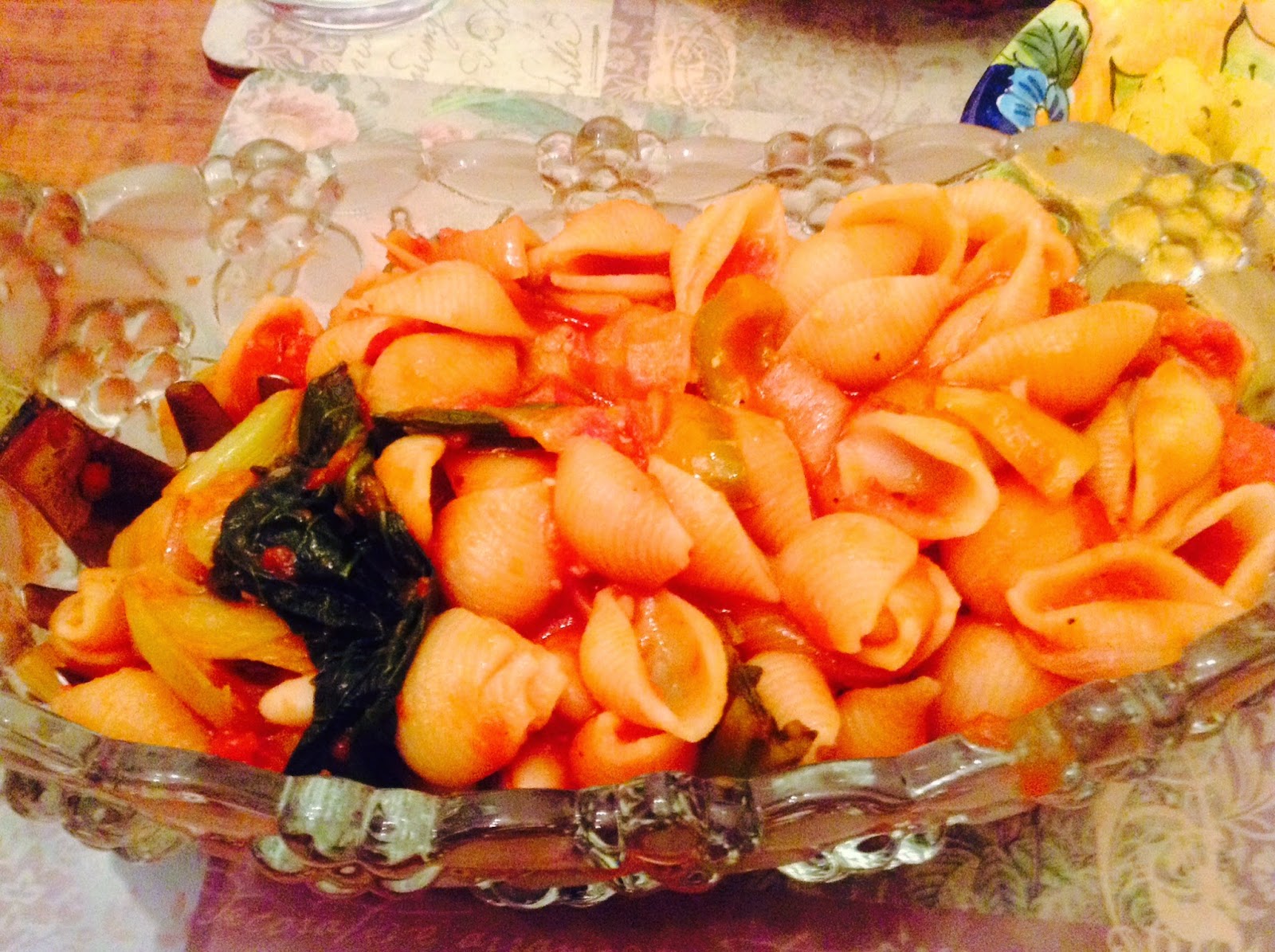 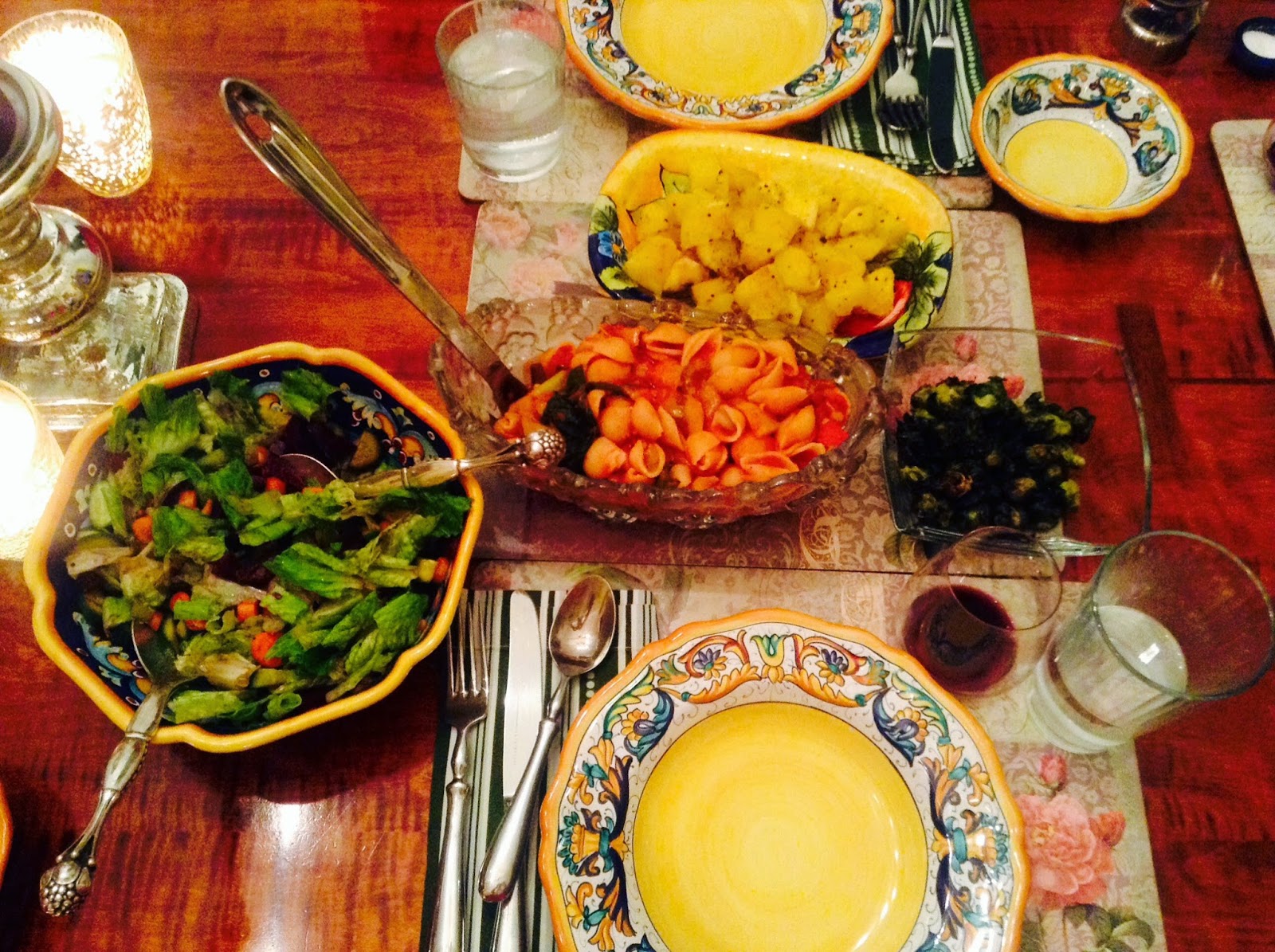 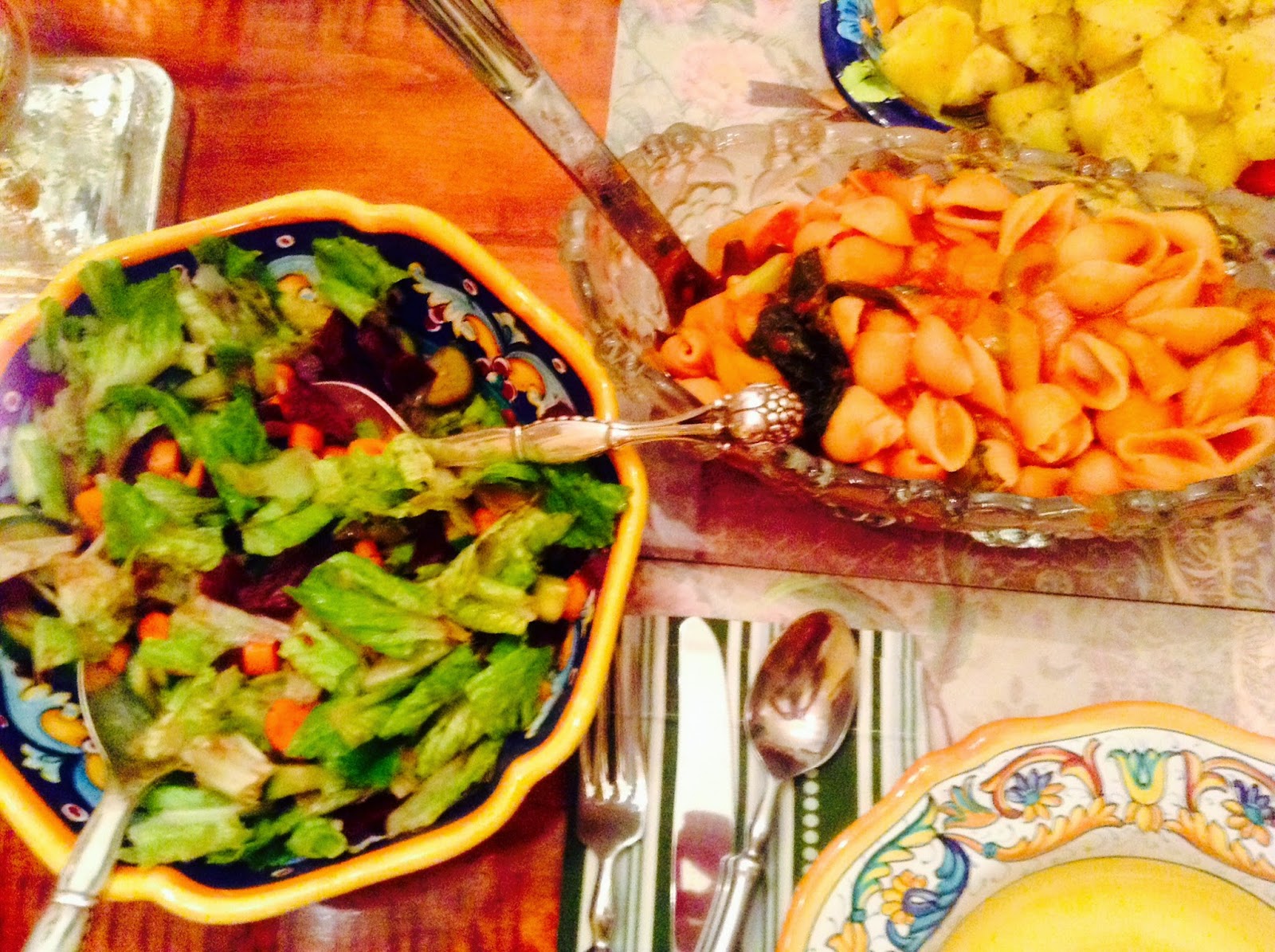 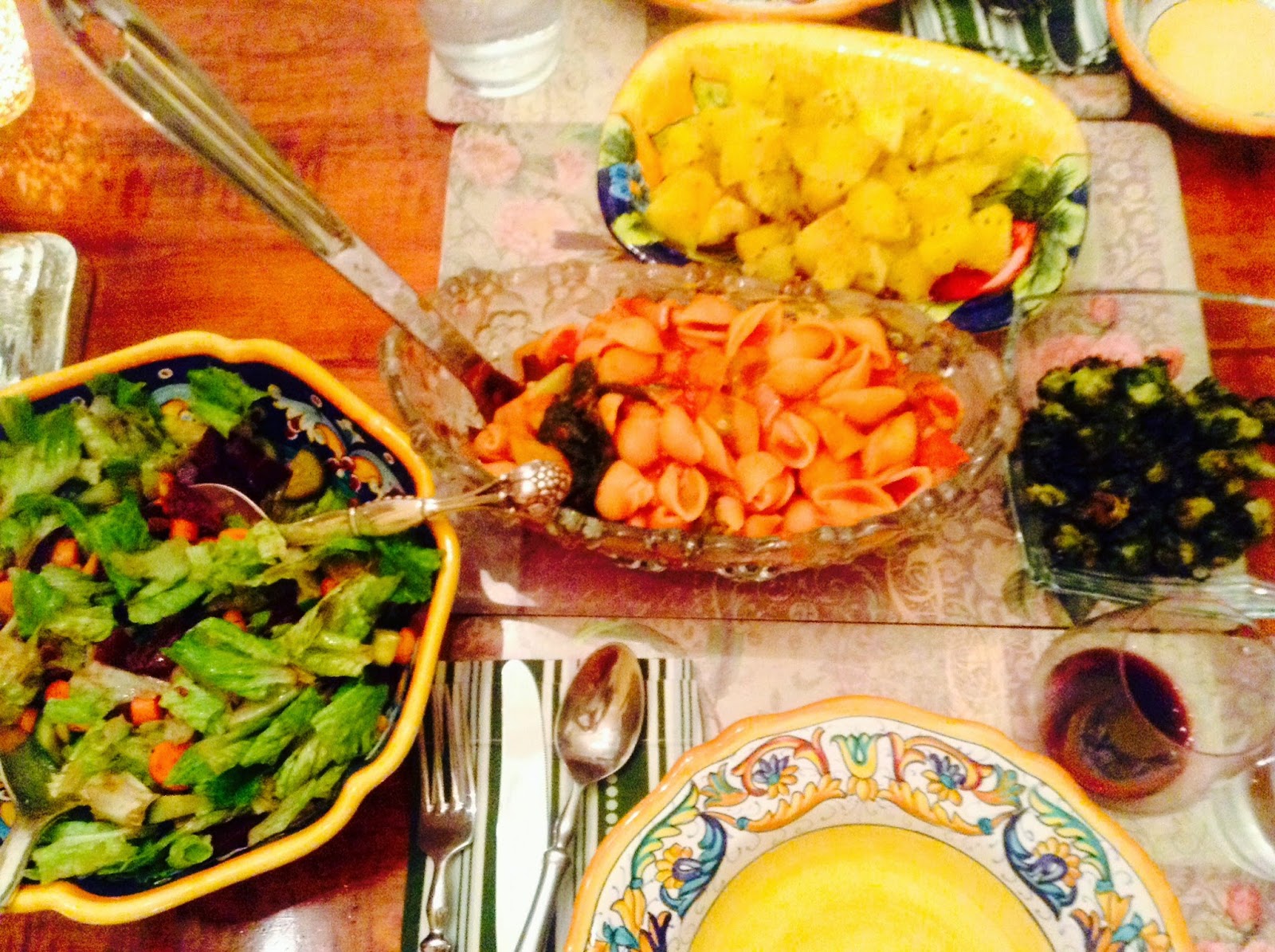 The above is just a fancy way of saying I roasted spaghetti squash seeds and threw a bunch of good spices on them. Consider it your reward for the nuisance that is figuring out how the hell to cut a squash in half without slicing your hand off, pulling your tricep (Life-changing tip: You can roast it whole, or throw it in the oven for 10 minutes to soften up, and then cut it in half), or both. 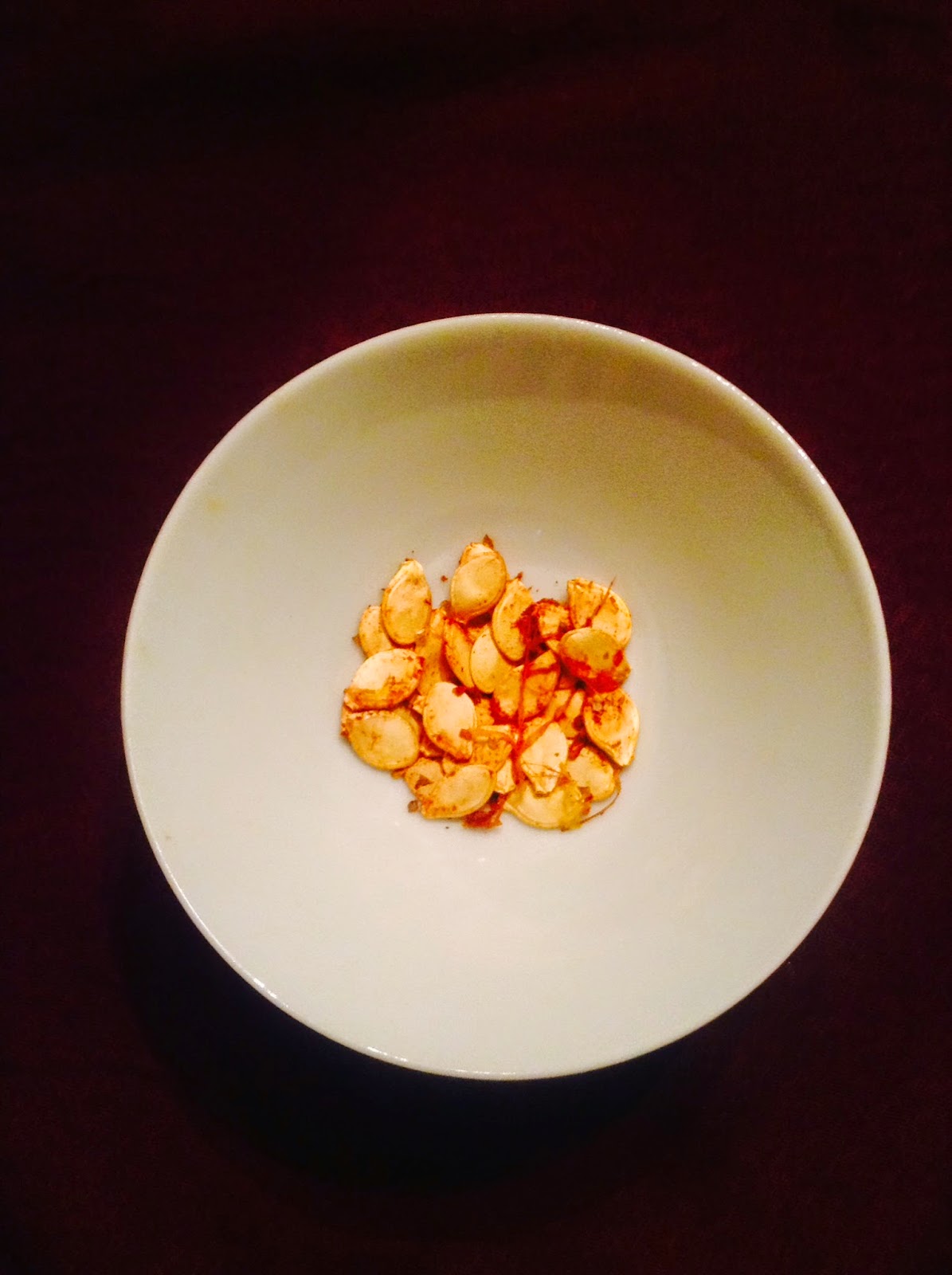 It’s so easy, and the result is a real treat. Eat them as a snack (you’ll never pay $4 for over-salted, under-seasoned sunflower seeds again) or toss them into salads as a crunchy topper or sprinkle over warm dishes as a seasonal garnish. 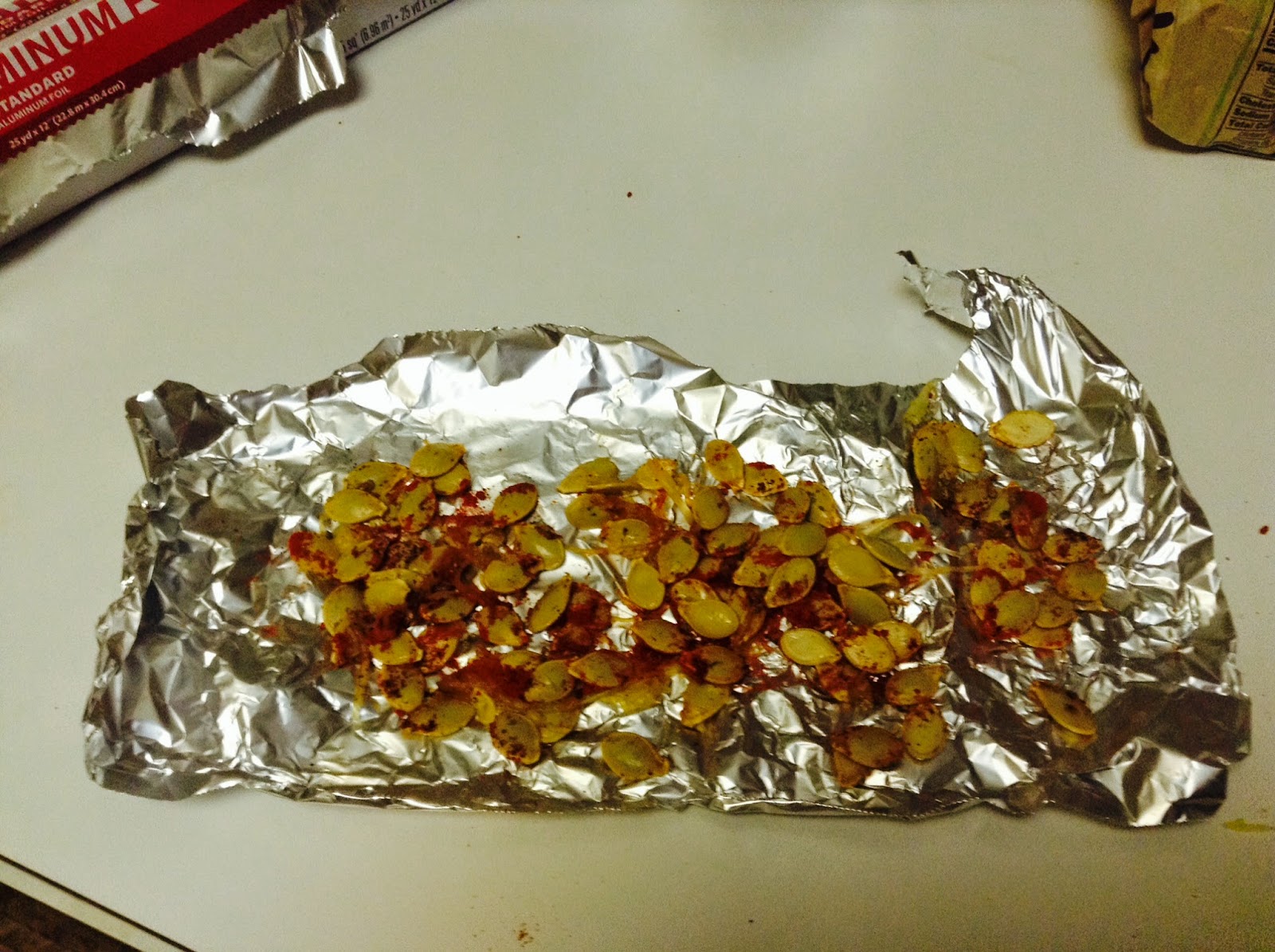 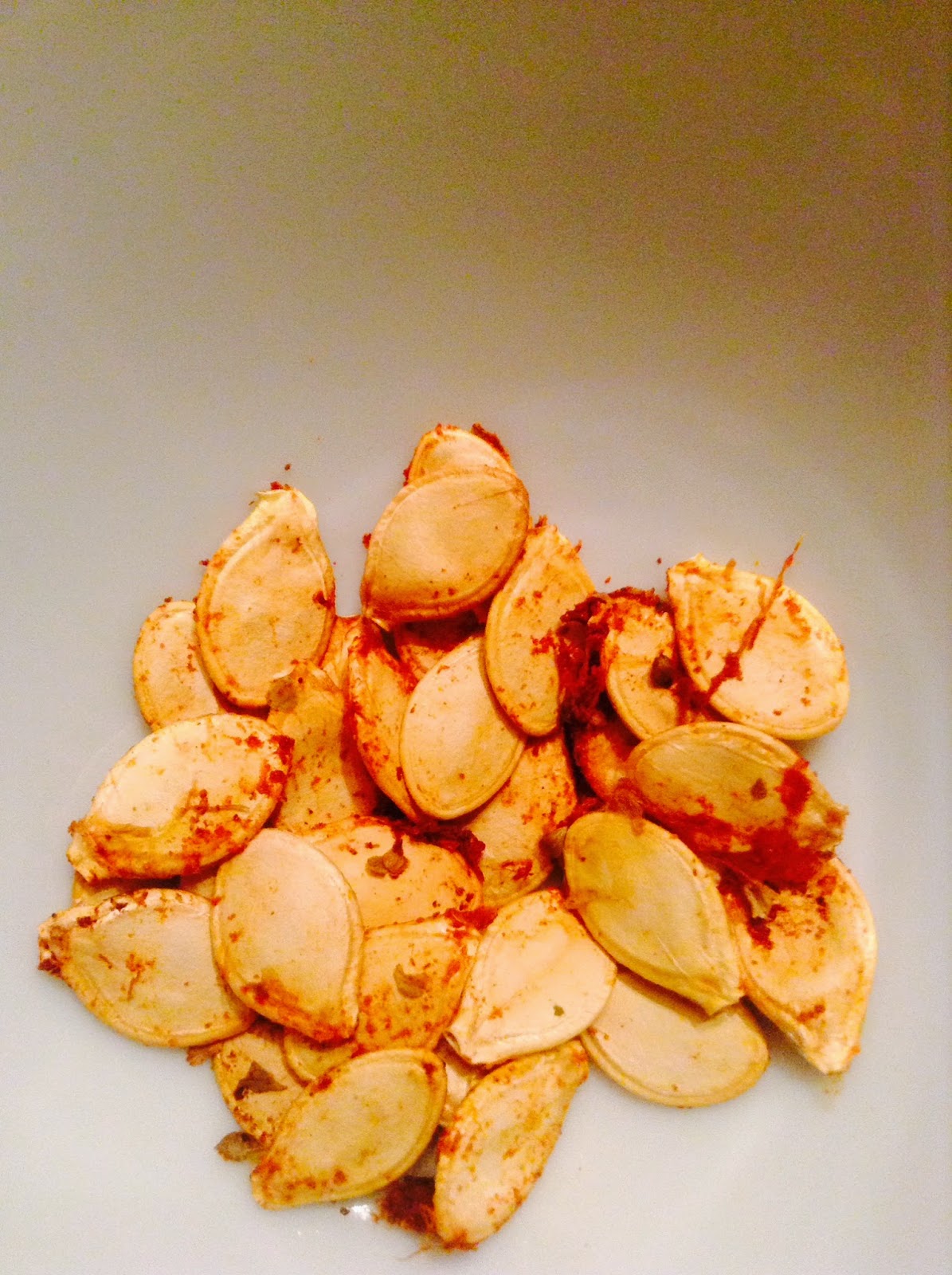 Ingredients
Seeds of one spaghetti squash, scraped out
1 tablespoon paprika
1 tablespoon olive oil
1 teaspoon chipotle powder
1 teaspoon cayenne pepper
Whatever other seasonings you want slash have on hand
1. Line tinfoil with spaghetti squash seeds. Pour olive oil and spices over and toss with hands until evenly coated.
2. Roast in 200° oven for 20 minutes, or until seeds have reached desired crispy-ness.
Feel free to add to main dish, like I did below in this eggplant-onion saute, but make sure you don’t try one before stirring into the mix (because once you pop one, they’ll probably all be gone before you make it to this step) 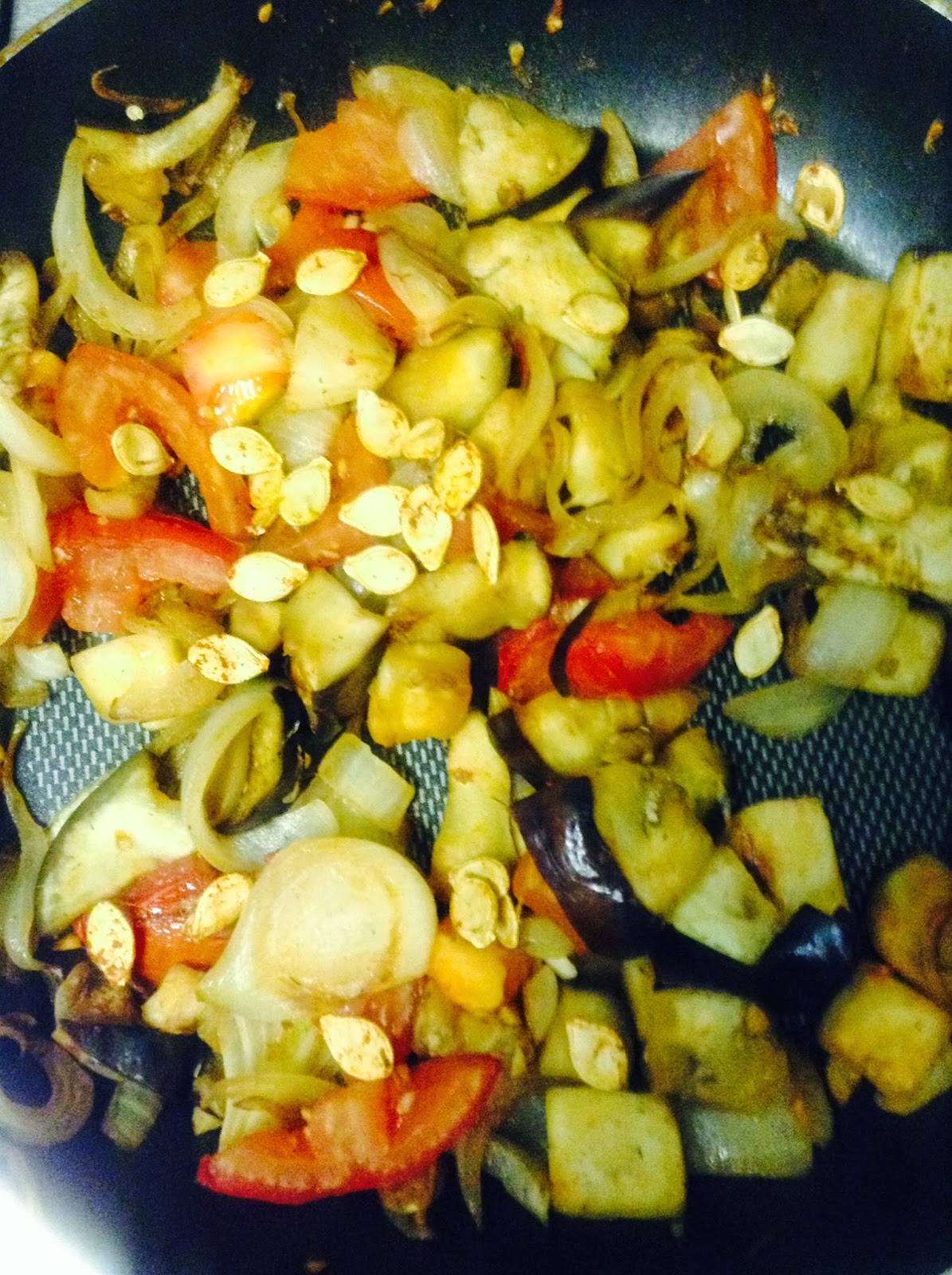